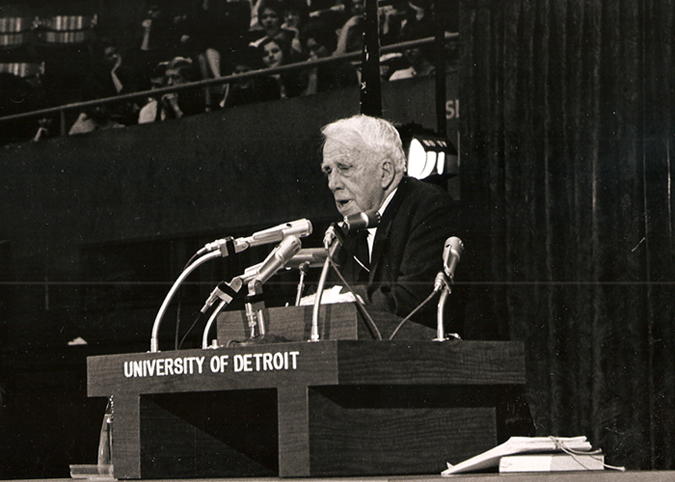 Robert Frost gave one his last public readings of his poetry at the University of Detroit on November 14, 1962. (He died January 29, 1963, at the age of 88.) He was also awarded an honorary degree form the university in “recognition of the achievements of Robert Frost as a poet and humanist, who has advanced permanently the art of poetry and the importance of the liberal arts in our national life.” (part of the citation read conferring the honorary degree of Doctor of Humane Letters upon Robert Frost by the University of Detroit, November 13, 1962). He spoke for over an hour before a sell-out audience of 9,000 people in the Memorial Building (now known as Calihan Hall),  reciting and discussing his poetry as well as commenting on a variety of subjects. Some of his quotes:  “I count cities as trophies of my life, especially if I’ve slept in them-alone. These big cities give me confidence. They hold the continent down.”, and “I never dared be radical when I was young for fear I would be conservative when old”. He even gave his version of the Mother Goose rhyme “Humpty Dumpty”: “Humpty Dumpty sat on a wall. Humpty Dumpty had a great fall, and not all the psychiatrists nor all the psychologists could put Humpty Dumpty together again.”

A video of Robert Frost’s address and poetry reading at the University of Detroit is available at the library. 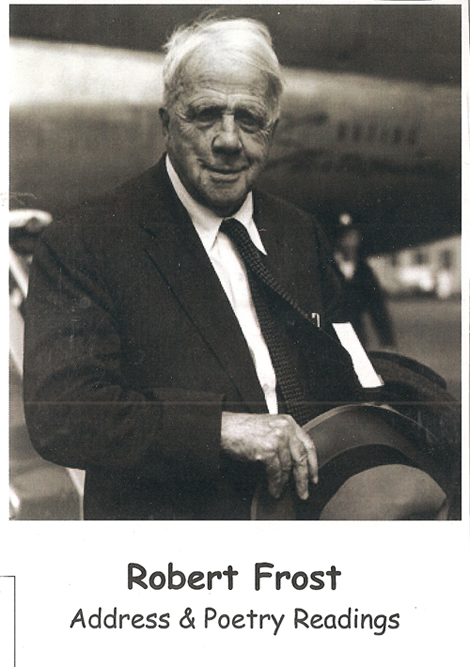 While Frost was in Detroit for his address, he stopped by the Fisher Theater the night before, noting its beauty remarked: “You should have a beautiful place in which to say beautiful things.” The theater manager, Joe Nederlander, invited him to watch the current attraction “Lord Pengo”, but Frost graciously declined. “If I was only 85, I might; but I have to get my sleep.”