Before there was Email, Twitter, and Texting-Telegrams sent to University of Detroit August 2013

Before there was the internet to send messages, the telegram was the most efficient and probably the cheaper way to correspond over long distances. The UDM archives has a collection of over 50 telegrams between John P. Scallen (attorney and UD alumni), and Charles (Gus) Dorais while negotiating terms to become the next football coach of the University of Detroit Titans. The telegrams date from January 23, 1924 to March 23, 1925. Some of the telegrams were very short such as at note that a letter had been sent or day and time of arrival at some city. A few would state a date and time when a long distance call would be made to make sure that he would be there to receive the call. Some were a little longer with some problems that came up, such as Dorais’ wife who seemed to have some concerns about moving to Detroit. Knute Rockne, close friend of Dorais, also sent a telegram about the move to become the next football coach for Detroit.  While Dorais was coach, the football team had a record of 113 games won, 48 lost and 7 tied. 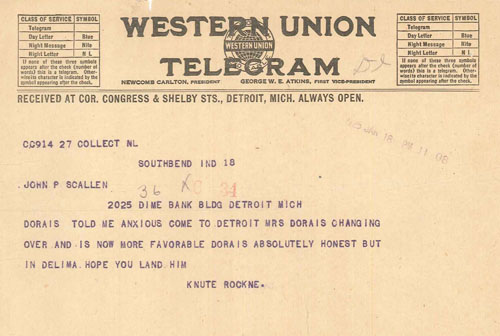 Another telegram of some note in the collection came from J. Edgar Hoover. He had to decline a request to be the speaker for the 1951 commencement. At the time the university was celebrating its 250th birthday and in the letter inviting him, it was also noted that, “some six to seven hundred (students), will go immediately into one of the military services.” The letter by the University president goes on to say “It is my conviction that this crisis is more moral than military. The role of education in this moral crisis is exceedingly important….I am especially anxious to have a commencement speaker who will rightly interpret the crisis and counsel and inspire our young people to go forth as effective citizens and leaders.” 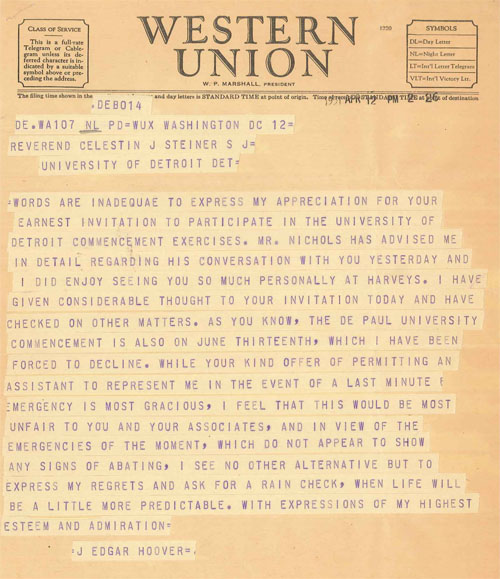 I am not sure which “crisis” or “emergencies” is happening during this period that might involve the FBI. A quick wikipedia search of that time period list items like the Cold War,  Korean War, General Douglas MacArthur is relieved of his command by Harry Truman and the trial of Ethel and Julius Rosenberg. Come to think of it-is there ever a time when there is not some kind of national crisis going on?