The Clocks in the Tower-No Time! No Bells! September 2013 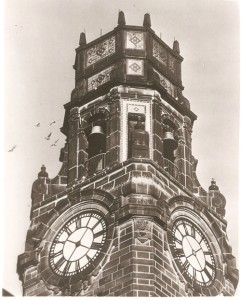 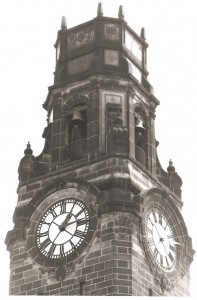 Take a look at the first picture of the tower and compare it to the second. Notice anything? (Aside from the fact that it needed a good cleaning!) The tower built in 1927 to cover up a smoke stack of the central heating plant for the university, was dedicated as a memorial to former students who gave their lives during World War I. Since the clocks were installed, they never did work well, all four clocks would have different times and at some point stopped all together. While undergoing repair, they took the hands off the clocks. The most interesting part about the repair of the tower clocks is that it was done as a personal gift by a few students of the university. Thomas Toenjes, a senior in electrical engineering, along with his associates, Edward Sailer, Peter Kay, and Leo Moore, spent months of their own time getting no money or class credit working on repairing the clocks. 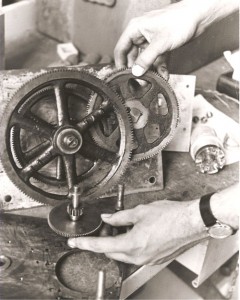 The university paid for the material they used which came to about $800. The university had gotten estimates to repair the clocks of $10,000-$25,000. After having the correct time only twice a day for some 12 years, the clocks finally got running on time in 1965-but that’s not the end of the story. It still had no bells, which leads to another interesting story.

One quiet night in 1953 the bells started to strike twelve and went on, and on, and on, and on……The Rev. George Shiple, then superintendent of the grounds and buildings, got Clerical Jimmy Valentine, as the only man with keys that summer night, out of bed to turn them off. They did not ring again for another 13 years!

Paul Bricker, a graduate student in physics along with fellow ham radio enthusiasts and members of the U-D Ham Club, John Augenstein, Mark Karney, Dennis Kramer and several machine shop technicians, put in 500 (free) hours along with $500 for equipment and material to get the bells ringing again. Each of the four bells weighs 1,100 lbs. and are all the same tone. On Oct. 20, 1966, when Rev. Malcolm Carron, S.J. was inaugurated as the university’s new president, the bells were ringing again for the first time since they were silenced in 1953.

On one more final note: for its 50th anniversary, the tower got a much needed bath. In 1977 a low pressure sand blasting process returned the tower to its original sandstone color. 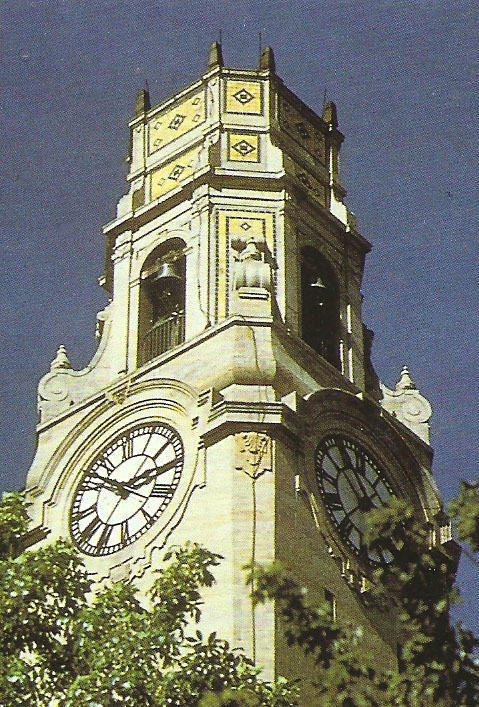