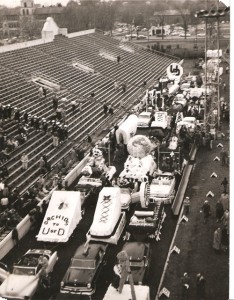 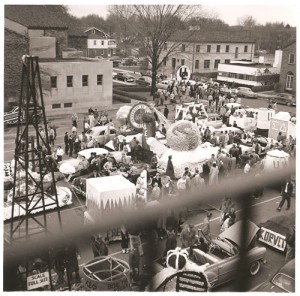 Back in the days when the University of Detroit had a football team, Homecoming of 1953 had all the traditional activities: pep rally, parade floats, homecoming queen, bonfires, and a dance before and after the game. Homecoming festivities would start on Friday with a dance at the Memorial Building (now called Calihan Hall) when the homecoming queen would be crowned. In 1953 D’Anne Howell, a dental hygienist student, was chosen as queen and her five court attendants were Mary Carlson, Marge Doherty, Fran Kollar, Carol LeDuc and Beverly White. 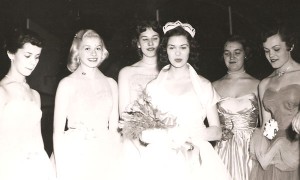 On Saturday around 2:00, the floats would start assembling in the Gesu parking lot where they would be judged. The parade would begin about 3:00 with a tour around the campus area (according to the map in the Varsity News it would go from Six Mile to Fairfield, to Puritan to Livernois where it would turn into the campus and into the stadium). At the stadium there was a pep rally and a bonfire in which in 1953 the wood came from brittle dry lumber from buildings that were demolished because they were in the path of the Lodge expressway that was being built. The homecoming queen, from a safe distance, ignited from a torch the gasoline-soaked pile to symbolize the conquest of the visiting team, in this case the Aggies of Oklahoma. 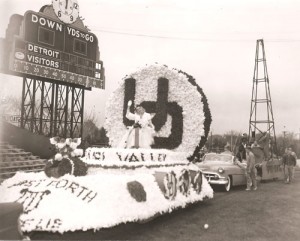 Game time began at 8:15 p.m. against Oklahoma A & M. At half-time the top three floats picked as “best in the parade” and the queen and her court were honored. During the half-time parade one of the floats depicting a giant atomic bomb mushroom cloud which had been pouring smoke from the top, suddenly burst into flames. The student inside safely scrambled out and the float was unhitched from the car and rolled into the end zone, where the two teams lined up to start the second half. 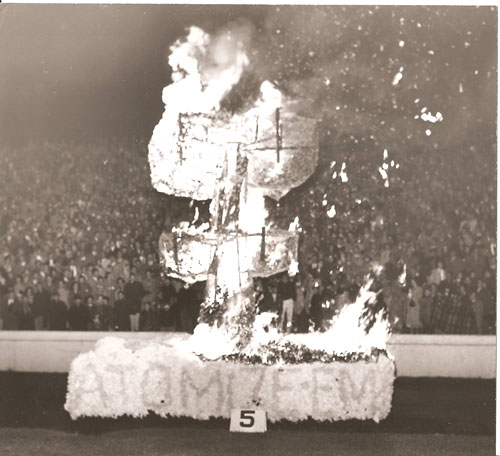 No one was injured.

UD squeezed out a victory with a score of 18-14. They went on to win the season’s co-championship of the Missouri Valley Conference (MVC) with of all teams – Oklahoma A & M.

After the game, they held a Hardtimes dance in the Memorial Building  featuring the music of the University dance band under the direction of Robert J. Tipich with vocal accompaniment Margie Shields, Arts freshman and Bob White, Commerce freshman. Tickets cost .75 cents per person.