Some Unique Items in the Archives May 2014

In the archives, we try to keep at least three copies of everything like yearbooks, student newspapers, and just about any publication put out by the university. However, there are those items that are a one time thing and will never get duplicated.

Here are a sample of some of those items: 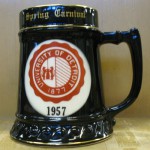 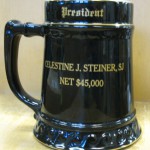 There may be lots of mugs with the 1957 Spring Carnival on it-but this one has a special designation: it has the President of UD name and the amount the Spring Carnival raised, $45,000.

In 1966, Malcolm Carron S.J. was inaugurated as president of the University of Detroit. This is the medallion he wore for the inaugural ceremony. Each of the schools are represented on one of the discs: College of Arts and Sciences 1877, College of Engineering 1911, School of Law 1912, Evening College of Commerce and Finance 1916, College of Commerce and Finance 1922, The Graduate School 1927, School of Dentistry 1932, Colombiere College 1959, and School of Architecture 1964. As one can tell from this historical artifact, the university has gone through a lot of reorganization since it was produced.

And then there are these basketball shoes. Maybe they are not as unique as the mug and the medallion, but they are special in that they belonged to Frank O’Donnell (Class of ’41). Frank was a close friend of Bob Calihan, the name should be familiar, that is who Calihan Hall is named after. From the story told by Frank’s daughter, Bob Calihan was offered a place on the varsity basketball team, but not Frank. Bob said if they didn’t take Frank, he was not going to come to UD; they took Frank and they both turned out to be very productive players on the basketball team. They remained close friends and we even have the letters Frank received in support for Calihan’s nomination for the Naismith Basketball Hall of Fame. 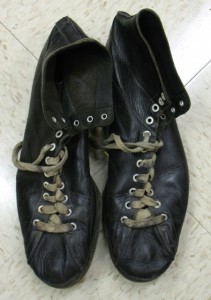 So many stories in the archives-I wish there was a way they could all talk about what they experienced.