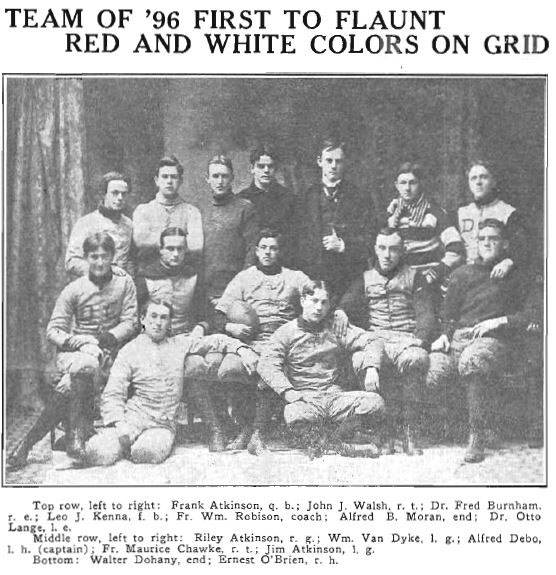 Now that football season is upon us, a time take a look back at the early teams of the University of Detroit. Football was such a big part of the university that one of the first buildings that was constructed on the McNichols campus was a football stadium. But the move to the McNichols campus did not take place until 1922 and there was no space on Jefferson Avenue where the school was located to play home games. They sometimes used Navin Field (the location of the old Tiger stadium) or in one report in the Varsity News, in an auditorium called the Princess Rink, where the city held horse shows and staged prize fights. It was not always possible to have enough college students for the team, so sometimes on the early teams even senior UD high school students were enlisted for the football team. The football team even had to buy their own uniforms. You do have to realize that things like helmets, shin guards and shoulder pads were not part of a football uniform back in those days. As one team member reported he “emerged from every game with a black eye.” 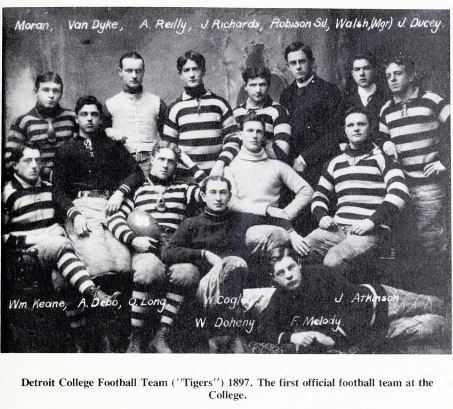 As popular as football might have been, it was not until 1917 that the school would provide the equipment and secure a regular practice field. The red and white stripped turtle neck sweaters, modeled after Princeton’s, and purchased by Doctor W.E. Keane, served to identify the “Red and White Tigers.” The team name did not get changed to “Titans” until 1924.

All the members of the first team of 1896-97, went on to successful careers as physicians, lawyers, business men, an internal revenue collector and one clergyman. Even the first coach, William F. Robison, S.J. became President of St. Louis University (1920-1924).

Varsity football eventually died at the University of Detroit, but that story will have to wait for a future blog.