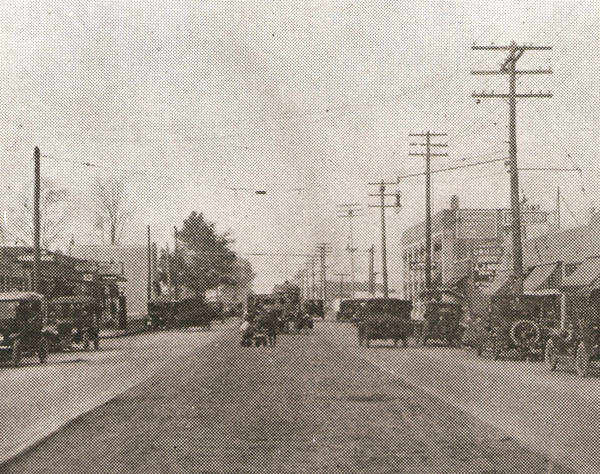 There are several letters in the archives file about changing the name of “Livernois” to something else. In 1925, UD President Rev. John McNichols, inquired the City Council of City of Detroit that since the University of Detroit would be erecting a number of buildings potentially worth more than $15,000,000, that Livernois Ave. could be renamed as “Varsity Road”. In addition to the considerable amount of money being invested in the property, he listed a couple more reasons for the name change:

In a follow-up to this request, the City Planner replied that such a name change is not easily done for a number of reasons. Livernois Avenue is an old historic name representing early settlers and the street goes beyond the limits of the City of Detroit into Oakland County. There is also a concern that the business and property owners would incur considerable expense to change their stationery as well as confusion in the delivery of mail.

There is additional correspondence with Clarence Burton of the Burton Abstract and Title Co. for information about the Livernois family name. Turns out Livernois had a large family with branches all over the city and state.  In his letter to Fr. McNichols he writes: “The people have been generally law abiding and honorable members of society, filling neither places of great importance nor the jails and penitentaries (sic). They were and are just the plain people. They represent the farmers and country people of the two centuries of our existence.” In addition, he felt if the authorities were to change the street name, he suggested that “University Place” or Avenue or Boulevard would be more appropriate. “Varsity is not a name, (i)t is not even a word. It is slang and has no business in our street nomenclature.”

Rev. McNichols thanked Mr. Burton for his information, but still was not convinced that the Livernois name should be kept.  “But to have the insinuation of decayed meat cast into your face every time the place of your residence is mentioned is really hard, even for a humble and unassuming University President.” He also contended that “Varsity” was a valid word and had a more English flavor than “University” and since he was Irish, would like a name with an English flavor. So then he asked if “Pere Richard Highway” as the name would work. Mr. Burton replied that Father Richard had already been honored by the city by placing his name on a branch library.

The discussion about changing Livernois to a different name comes up again in 1932. Rev. John McNichols had retired from active presidency on April 7, 1932 to enter Ann Arbor Hospital. A few weeks later a cold developed which further undermined his health and he passed away April 26, 1932 at the age of 57. This time the request was made to change Livernois to McNichols Road. There are letters of protest from some of the businesses on the expense and confusion that would be created by changing the street name. There is one letter, however, from a representative of the Livernois family that suggests that instead of changing the Livernois name to McNichols, that it would be better to rename Six Mile Road to McNichols Road in memory of Rev. McNichols. Although I have not been able to find when that name change became official, no one seemed to have any objection to calling it McNichols Road instead of Six Mile Road. So maybe Rev. McNichols can rest in peace that the official address of the the University of Detroit Mercy is 4001 W. MCNICHOLS Road to mitigate his distaste of a “Livernois” street name.