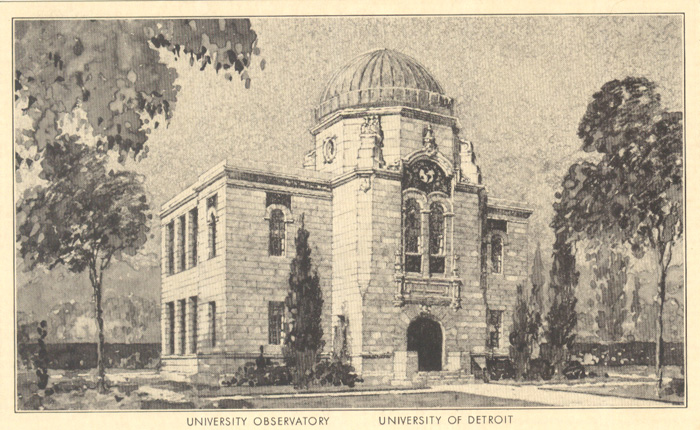 Back around 1927 to 1930, when the University of Detroit had just started to develop the McNichols campus, there was a plan to build an observatory. Astronomical equipment valued at $25,000, enough to outfit a complete observatory, had been donated to the University of Detroit by William A. Fisher, president of the Fisher Body corporation in 1927. The instruments were purchased from the Rev. Anton Petrarjis, who had to give up his hobby of studying the stars because of ill health. 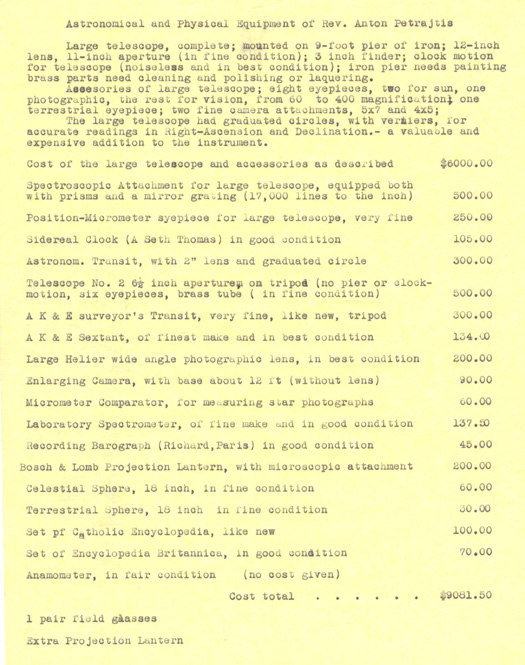 The equipment, which included a large telescope with 12 inch lens and a 16 ft tube with a massive nine-foot pier, a second telescope with a six-and-a-half-inch lens set in a brass eight-foot long tube, required a lot of storage space until an observatory could be built. The equipment was stored in the Science building (now the Architecture building). There was a hope that an observatory could be built with donations from former students who were now priests as a fitting memorial by the alumni priests “who have taken up God’s work.”

So the university had the equipment and they even had a faculty who could take charge of the observatory. Rev. James L. McGeary, S.J., professor of physics, had served as an assistant director of Manila Observatory in the Philippines and had built and directed the observatory of Marquette University at Milwaukee, Wisconsin. There was also a keen interest by the students to have an observatory built, many offering their services to put up a temporary observatory, –anything “to get things going.” All they really needed was the building!

As appealing the need for an observatory might have been (i.e. students of civil engineering required a course in astronomy, would hold its standing in the educational world, the great city of Detroit has no observatory, the nearest one is at the University of Michigan in Ann Arbor), it did not appear to have enough financial funding to proceed with such a project.There is in the file a listing of pledges of the diocesan clergy in 1930 with the amount paid. It does not appear that they got anywhere near the goal of $15,000 (or $24,000, the first original amount of $15,000 on the memo was crossed out). From the donor list of the 1930 Observatory Fund, of the priests that were still alive, less than $6,000 was raised. They were hoping for $100 from 150 priests. The few that did contribute gave from $10 to $500, with one priest donating $1000. One should probably keep in mind that in 1930, a hundred dollars during a period of economic depression is a lot to expect.

So what happened to all the equipment to be used for the observatory? In the file there is only a handwritten note that the “telescope is now in the hands of the Detroit Astronomical Society.” A search of the internet does not show any such society that is active-but after 85 years, who knows what became of the telescopes.