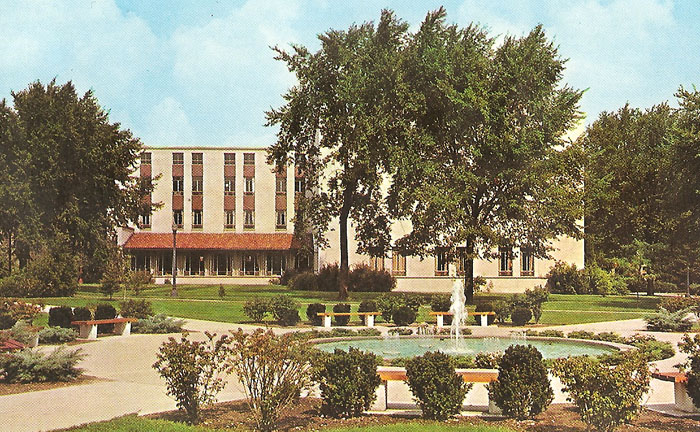 The Fisher Fountain is a memorial to Charles T. Fisher,Jr., a prominent and active businessman and civic leader in the city of Detroit. He graduated from the University of Detroit High School and at the time of his death was President of the National Bank of Detroit. He was also a member of the Board of Directors of General Motors, American Airlines, Cunningham Drug Stores, Detroit Edison and Michigan Bell. 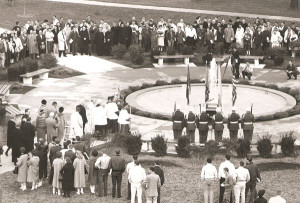 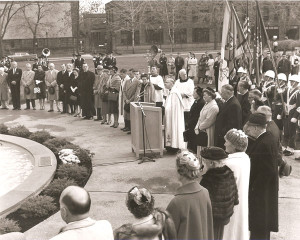 The dedication ceremony, held October 21, 1960, was attended by members of the Fisher Family, and friends, alumni, faculty and students of the University. Music was provided by the University of Detroit Band and Chorus. The Army and Air Force ROTC provided the color guard. The Fountain was made possible through contributions by friends of Mr. Fisher from all over the nation, and an endowment by his widow.

After the blessing, part of Fr. Steiner, President of UD, remarks:

“As the memorial plaque indicates, it is  “A Fountain of Water Springing Up into Life Everlasting.” It is a symbol, then with various meanings. To some it may be merely a means of beautifying the campus of the University of Detroit; while to others it may represent an area of tranquility, wherein faculty members and students may find a moment of rest in the midst of a busy day; or wherein as evening shadows lengthen across the campus, they may pause to say a silent prayer for themselves and of the man whose memory is kept fresh in our minds by the gentle rise and fall of the “water springing up into life everlasting.”

To me, though, this fountain, above all else, symbolizes goodness-the goodness of the man memorialized and the goodness of those who made this fountain a reality. Let me explain. With reason, a major concern of universities today is the development of highly competent scholars and scientists. Even more urgently needed than scholars and scientists, however, are good men and women who are sensitive to goodness, truth and beauty, of God and His creation, men and women, finally, whose lives are daily motivated not just by principles and purposes, but right principles and good purposes.

Charles T. Fisher, Jr., … was a good man, good in the fullest sense of the term. …Since our lives are dedicated to the formation of the minds and hearts and wills of our students, we asked to share this fountain with them. Death, as we know, does not take away life, but only changes it. Our thought, then, was that [Charles] Fisher living with God in Heaven, would continue to be an example and inspiration to youth through this tangible reminder of his good life on earth.”