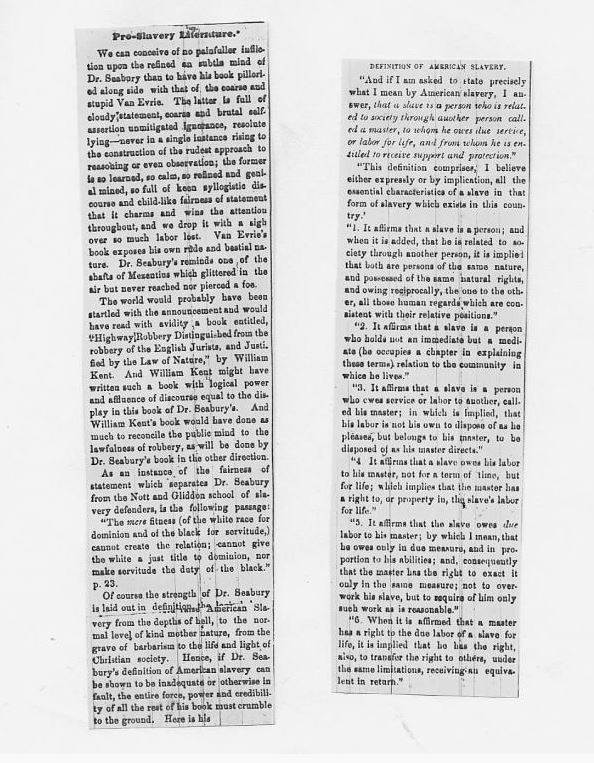 In an editorial published in the the Weekly Anglo-African newspaper on March 9, 1861, there’s a review of a recent book (titled, American slavery distinguished from the slavery of English theorists, and justified by the law of nature) on the defining of slavery and slaves as human beings.  The writer of this article compares this recent publication with another book published by John H. Van Evrie (another pro-slavery writer) about the same time. The focus is on the question of whether a slave owner has the right to take the life of a slave when he chooses. And this question comes down to the definition of slavery itself.

Dr. Seabury defines American slavery in this way:  “And if I am asked to state precisely what I mean by American slavery, I answer that a slave is a person who is related to society through another person called as master, to whom he owes due service, or labor for life, and from whom he is entitled to receive support and protection.”

But while the article begins with emotion, the argument ends with the logic of John Locke. The editor prefers the definition offered by Locke in his book, Two Treatises of Government: “To be a slave is to be subject to the absolute, arbitrary power of another; as men do not have this power even over themselves, they cannot sell or otherwise grant it to another. One that is deserving of death, i.e., who has violated the law of nature, may be enslaved. This is, however, ‘but the state of war continued’ (2nd Tr., §24), and even one justly a slave therefore has no obligation to obedience.”

The Weekly Anglo-African newspaper, in circulation in New York between 1859 and 1865, was among the first black newspapers.  It focused on communication within the black community, and helped weave together a people struggling to find a place in the predominately white America of this time.  It connected free people of color, encouraged the young, and offered a link with like minds.  These newspapers became a way out of despair, a safety net, and a forum for expression.

Use the magnifier tool to gain a closer look at this article in the Black Abolitionist Archive.  It offers a well written glimpse into the often irrational discussions on slavery taking place just before Emancipation.  (The “Dr. Seabury” the article refers to is Dr. Samuel Seabury, Protestant Episcopal minister known for his justification of slavery during this time.)