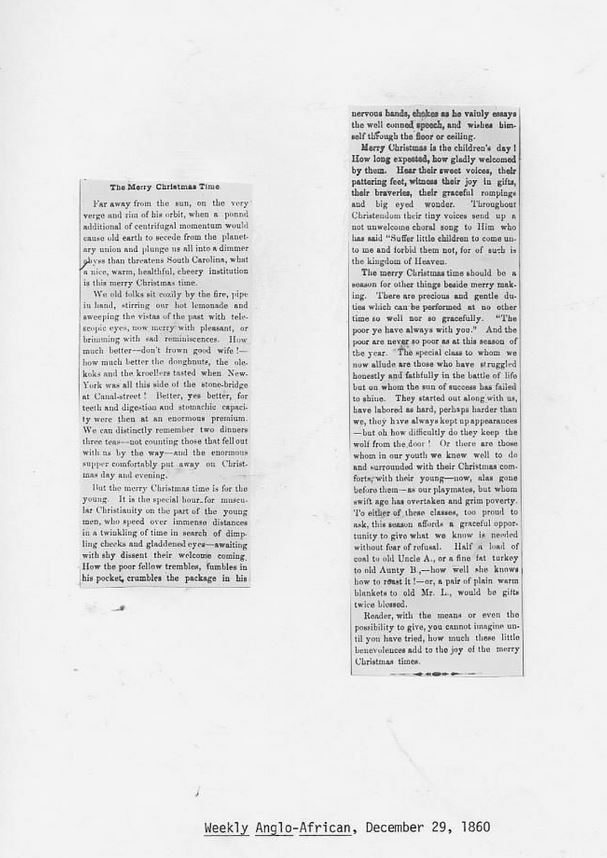 There are only three small entries in the Black Abolitionist Archive associated with Christmas, so I chose this one. While this holiday was important to an enslaved people learning about the celebration of this Christmas story from the periphery of the Christian families who enslaved them, the way they celebrated this holiday was different. The celebration of any special occasion during this time was focused on Church, prayer, thankfulness, and finding joy where they could.

On December 20, 1860, South Carolina seceded from the Union. In this essay (shown here), published in the Weekly Anglo-African on December 29, 1860, the writer expresses nicely what this period of time in this particular year meant to the average “Anglo-African” family. To them, it was about providing their children with a way to bring out the smiles, putting aside worries about the tense political climate to be with friends by the fire, and to focus on the poor who had far fewer blessings.

Often, it seems, you can read between the lines of these essays to discover something interesting, something of the true expression in the writer’s thoughts.  This essay is about more than a simple holiday “feel good” declaration.  It holds the seeds of discontent that would, in 1865, burst forth from a horrible war and into the end of slavery.  This was the beginning of a much longer fight for true freedom, but the truth of this couldn’t be known at that time.  While reading this essay, it’s a good idea to remember the times, think about the history, and bear in mind the struggles going on outside the walls of that newspaper office. In 1860 when this was written, the stirrings of war in an unsettled country were just about ready to move the battle forward.

Since this one isn’t long, I’ve included a transcription with the image below:

Far away from the sun, on the very verge and rim of his orbit, when a pound additional of centrifugal momentum would cause old earth to secede from the planetary union and plunge us all into a dimmer abyss than threatens South Carolina, what a nice, warm, healthful, cheery institution is this merry Christmas time.

We old folks sit cozily by the fire, pipe in hand, stirring our hot lemonade and sweeping the vistas of the past with telescopic eyes, now merry with pleasant, or brimming with sad reminiscences. How much better — don’t frown good wife! — how much better the doughnuts, the olekoks and the kroellers tasted when New-York was all this side of the stone-bridge at Canal-street!  Better, yes better, for teeth and digestion and stomachie capacity were then at an enormous premium. We can distinctly remember two dinners three teas — not counting those that fell out with us by the way — and the enormous supper comfortably put away on Christmas day and evening.

But the merry Christmas time is for the young. It is the special hour for muscular Christianity on the part of the young men, who speed over immense distances in a twinkling of time in search of dimpling cheeks and gladdened eyes — awaiting with shy dissent their welcome coming. How the poor fellow trembles, fumbles in is pocket, crumbles the package in his nervous hands, chokes as he vainly essays the well conned speech, and wishes himself through the floor or ceiling.

Merry Christmas is the children’s day! How long expected, how gladly welcomed by them. Hear their sweet voices, their pattering feet, witness their joy in gifts, their braveries, their graceful rompings and big eyed wonder. Throughout Christendom their tiny voices send up a not unwelcomed choral song to Him who has said ‘Suffer little children to come unto me and forbid them not, for of such is the kingdom of Heaven.

The merry Christmas time should be a season for other things beside merry making. There are precious and gentle duties which can be performed at no other time so well nor so gracefully. ‘The poor ye have always with you.’ And the poor are never so poor as at this season of the year. The special class to whom we now allude are those who have struggled honestly and faithfully in the battle of life but on whom the sun of success has failed to shine. They started out along with us, have labored as hard, perhaps harder than we, they have always kept up appearances — but oh how difficultly do they keep the wolf from the door!  Or there are those whom in our youth we knew well to do and surrounded with their Christmas comforts with their young — now, alas gone before them — as our playmates, but whom swift age has overtaken and grim poverty. To either of these classes, too proud to ask, this season affords a graceful opportunity to give what we know is needed without fear of refusal. Half a load of coal to old Uncle A., or a fine fat turkey to old Aunty B., — how well she knows how to roast it! — or, a pair of plain warm blankets to old Mr. L., would be gifts twice blessed.

Reader, with the means or even the possibility to give, you cannot imagine until you have tried, how much these little benevolences add to the joy of the merry Christmas times.”