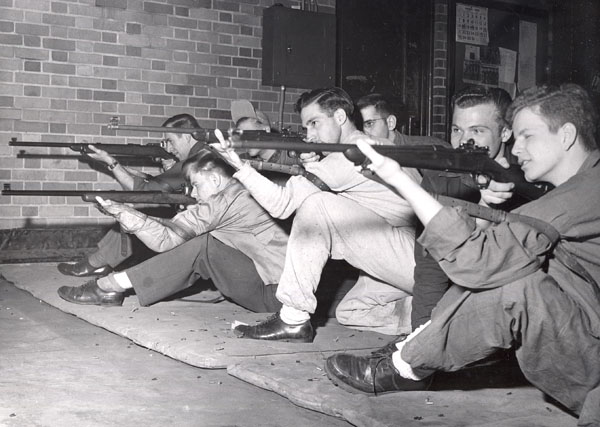 Back in the late 1940′s, the University of Detroit had a Gun Club. It was originally founded in 1937, but it was discontinued until after the war in 1948. Understanding the fine points of marksmanship and the mechanics of a wide variety of firearms was the primary aim of the club.

The 1949 Titan rifle team would participate in competition with other schools. ” In these matches the teams fire from four positions: prone, sitting, kneeling and offhand.

Five men fire 10 shots at each target. A bullseye gets 10 points, while the rest of the scoring ranges downward to nine, eight, seven and six points. Riflemen use .22 rifles which are single shot, semi-automatic with rear and front sights and no scopes.

Firing is done 50 feet from the target with 10 minutes allowed for each position.” 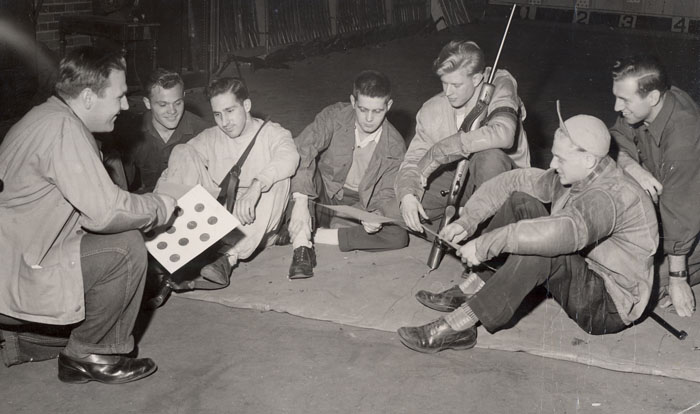 It was not just men who were members of the club, there is a 1948 news article in the file about a woman in the Gun Club. The “best student on the University club is a modern Annie Oakley, Jean MacDonald. She fired a 99.5 average in last year’s Hearst Rifle Meet.” In fact the 1953 the Tower Yearbook has the first listing for the Girls’ Gun Club! Don’t know what happened to the men in the regular “Gun Club”, but in the 1954 Tower Yearbook the women in the group renamed it “Coed Rifle Club”. My guess is that all the men that would have been in a Gun Club were involved with the ROTC that was now on campus. Any mention of a Coed Rifle Club disappeared and in its place the 1956 Tower Yearbook now has”U of D Rifles”, purpose: Army drill team.