Communication holds together the people within a defined social structure.  Slavery as a social institution in the early years of this country, kept people isolated.  The practice of using human beings as chattel was brought to the Americas as a matter of course in the early years of its colonizing.  At that time, no one seemed to pay much attention to the idea that there was something very wrong with this practice.  Soon, however, communication in the form of abolitionist newspapers began to encourage the need for dramatic change.

Black Abolitionist newspapers published between approximately 1827 and the early 1900s, helped a disenfranchised people feel in touch with those who were working hard to win their freedom.  These newspapers were not just part of the American experience, however.  The struggle here soon spilled over into Canada, especially after Great Britain abolished slavery in 1834.  After August 1st of that year, any person setting foot on British soil was automatically free, and the Black Press in Canada soon began reporting about those who escaped to the freedom of Canadian territories.

Published by organized free men of color, these newspapers helped develop a new culture in the U.S. and Canada, one that continues today.  Like a tap-wired, underground connection, these publications offered hope, community, and structure in an otherwise confusing and chaotic time.

UDM is proud to offer a collection of digitized editorials and speeches from the Black Abolitionist movement that spans this tumultuous period in American history.  Through impassioned speeches, lectures, and editorials that spoke directly to a dominated segment of the population, we gain insight into an aspect of human experience before the recognition of civil and human rights for everyone contributing to a growing country.  From a newspaper published in Canada, for example, we get a personal view of those crossing the border to freedom through the Underground Railroad system.  Most of these escaping slaves would pass through Detroit on their way to Sandwich, Ontario.

In an editorial published in the Voice of the Fugitive (December 17, 1851), the writer discussed a movement that sought to solve the slavery issue by encouraging governments in other countries to go “… elsewhere for goods like cotton, sugar, coffee, indigo and rice — the mainstays of the southern economy under slave power. “

Included in these Canadian editorials were tips on healthy living, farming techniques, available educational opportunities, and announcements like this one, alerting an escaped slave to the presence of “kidnappers” who were notorious for capturing newly arrived escapees and returning them for a reward. 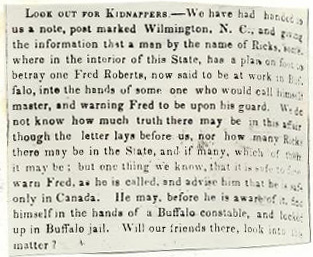 Although teaching slaves to read and write was a punishable crime, the connection offered by these newspapers motivated slaves to teach themselves despite the threat, and to pass these learned skills on to their children when they could.  The hope gained from these seemingly small steps, helped slaves look to the possibility of freedom in the generations to come.

Brotherhood and strong Christian focus offered people support, information, and access to the unexplored world that awaited them after the Emancipation Proclamation in 1865.   While the slave owners feared reprisal and revenge, the enslaved population craved only the natural freedom available to all men and promised to those living in this country through its Declaration of Independence.

The stories of African slavery that remain part of the history of the western world during the 300 years of its existence focus on the misery, the injustice, and the abuse of human beings.  And while this aspect of events should never be ignored or trivialized, the triumph of the enslaved people offers a view of not just survival but endurance, creative solutions to seemingly insurmountable circumstances, and the part the people themselves played in that final and dramatic end of slavery in the U.S.

History is often told from the standpoint of those in power.  We learn the basics of these events, the men who made dramatic and overarching changes to western economics and agriculture.  The archive of speeches and editorials published during this time offers a human perspective on a sad chapter in this country’s existence.  It also introduces the reader to men and women they may not have heard of before, but who worked tirelessly to bring about the end of a destructive practice that had become an unquestioned part of the workings of western societies.

The Black Abolitionist Archive offers viewers an in-depth, inspiring and very personal look at the struggle of a people who triumphed in the face of seemingly insurmountable odds.  And while the struggle for equality continues, looking at how far we’ve come as Americans over the past 154 years since the end of slavery would likely make those early Abolitionists quite proud.