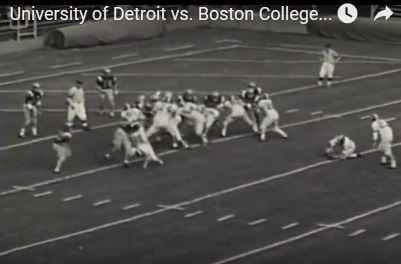 It had a few false starts and detours along the way but at last you can now watch the University of Detroit football team in action. It is not the whole game, and you may only catch a glimpse of the band and cheerleaders, and there is no sound, but hey, half the fun might be to call your own play by play action. Additional films will be added, and if you can ID some of the unknown games, let us know! You can catch the action on the UDM Libraries/IDS Special Collections-Football Collection page under “Game Films”: http://research.udmercy.edu/find/special_collections/digital/football/ 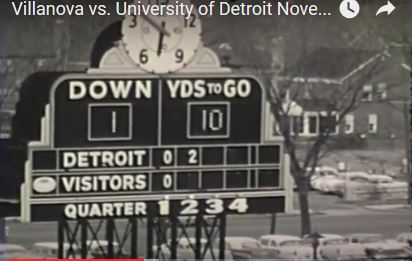 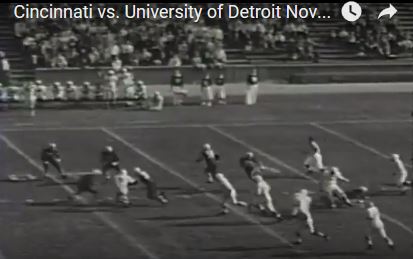 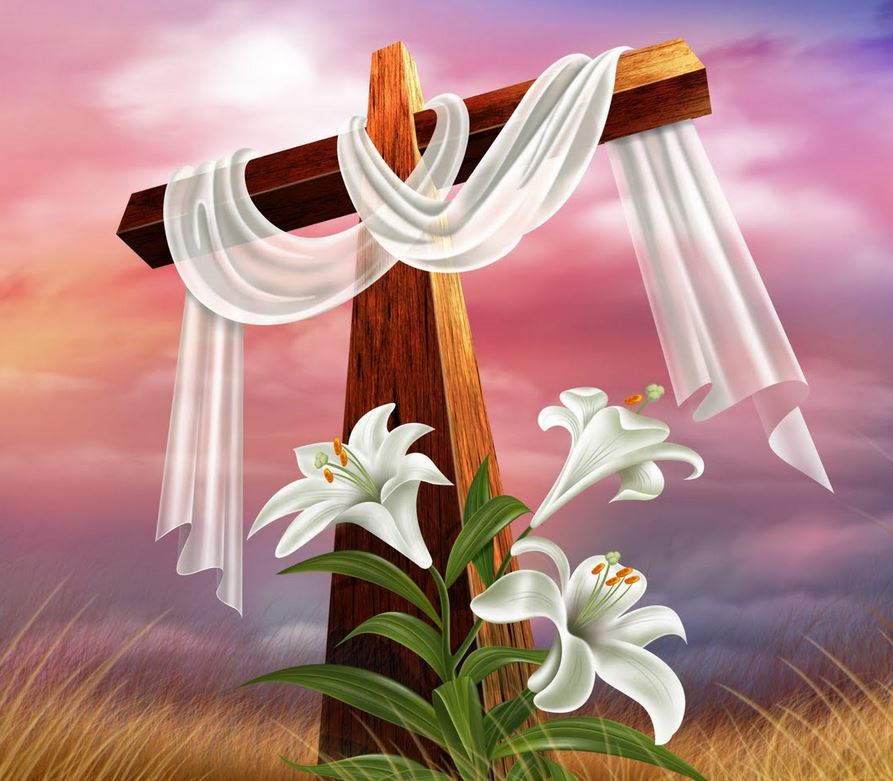 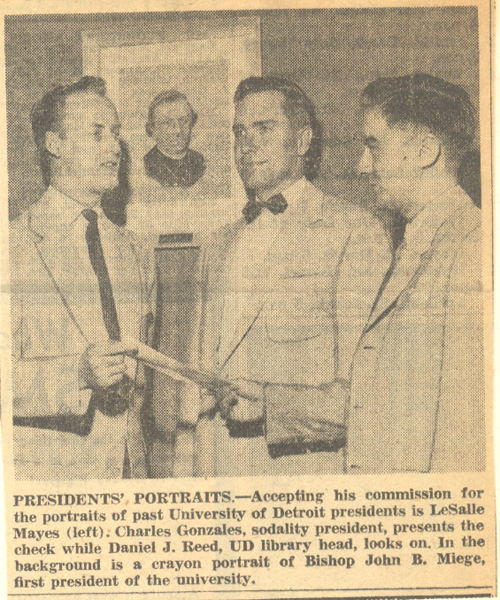 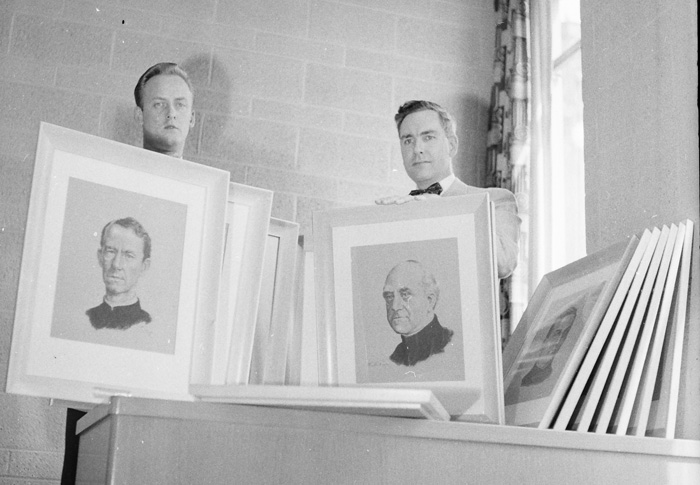 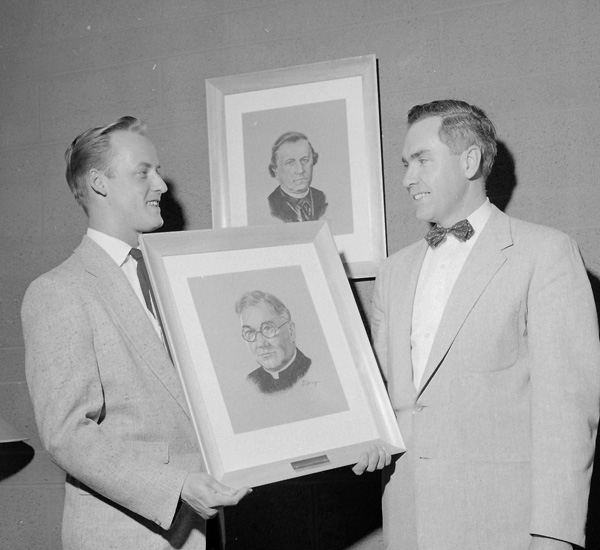 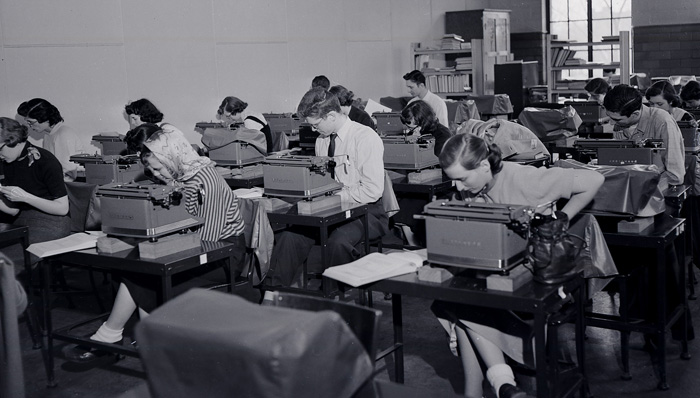 The University of Detroit used to offer a two-year certificate in Secretarial Science from 1941-42 to 1969-70. The program in secretarial training was for those students who did not plan to attend college for more than two years. Course requirements included accounting, shorthand, typewriting, basic business machines, business communications, legal stenography, and secretarial office practice. There were also theology requirements for Catholics, non-Catholic students could substitute six hours of study in biology, chemistry, geography, history, mathematics, philosophy, physics, political science, psychology or sociology. There were even awards given out for students in the program: Detroit Chapter of the National Secretaries Association (International) Award gave a cash award (to go towards tuition) for the freshman student with the highest scholastic average during the freshman year and Secretary of the Year Award by the Phi Beta Lambda (Gamma Eta Chapter), the student was given a secretary’s manual and a certificate of recognition to acknowledge scholastic attainment and mastery of secretarial skills. 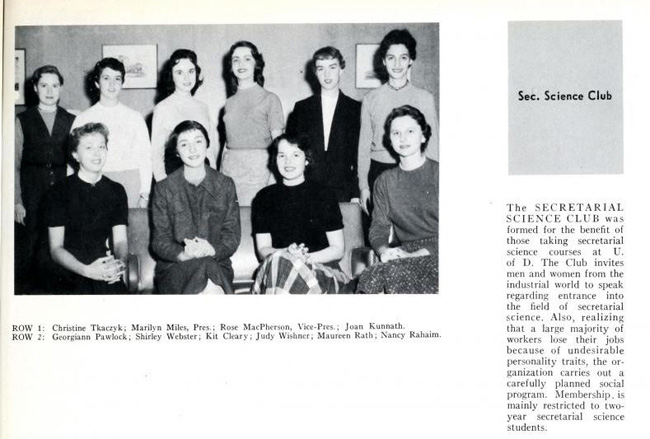 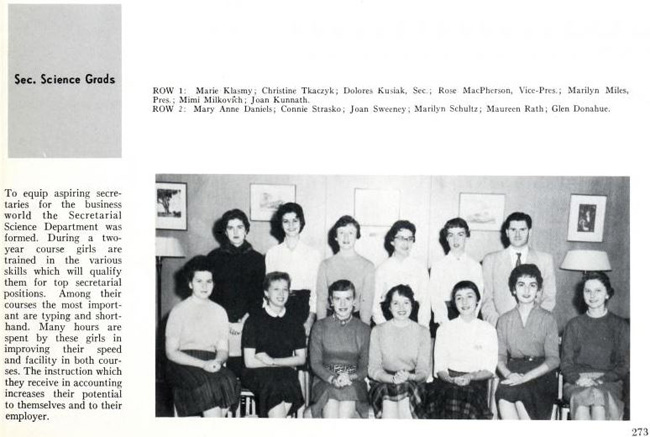 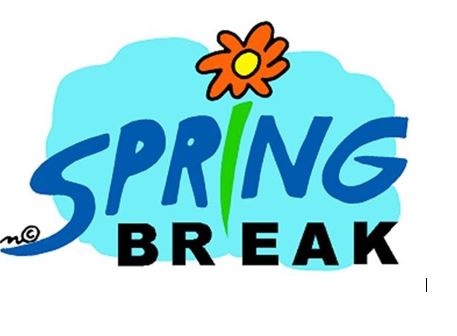 Students are off this week for Spring Break and so is this blogger.

I’ll be back next week with more stories from the archives and special collections. 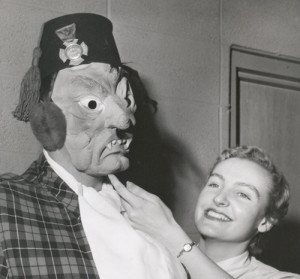 Back in the 1950′s thru 1960′s, the University of Detroit had a Spring Carnival and part of the festivities included the “Ugly Man on Campus” contest. Various fraternities would pick a member to run, with the winning student serving as the court jester on the King and Queen’s court. The winner was determined by the students voting by putting in pennies in a container, so the person who accumulated the most pennies won. The money was later donated to some charity. 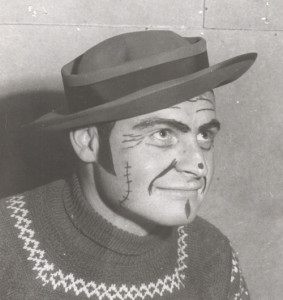 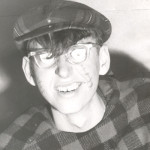 For more pictures see the Varsity News, March 27, 1956. I would hardly call some of these men “ugly”! 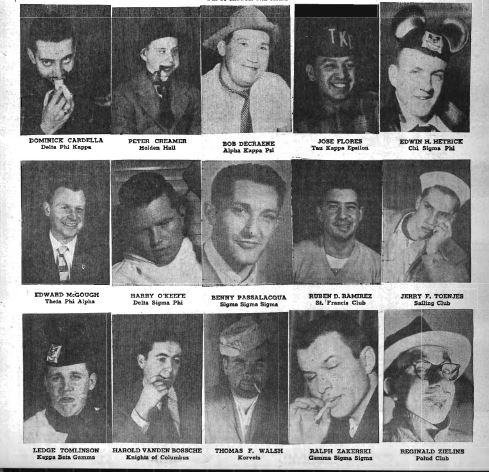 Decals from University of Detroit’s past February 2016 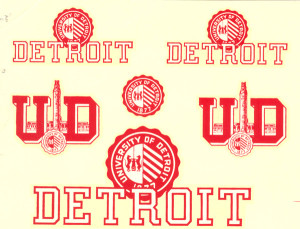 Another trip through the files of the University of Detroit: decals from the past. 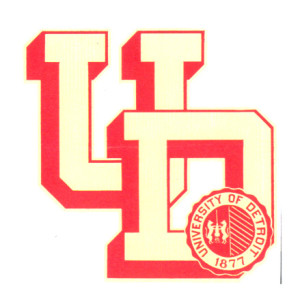 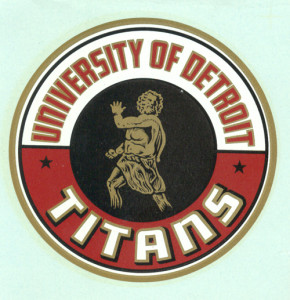 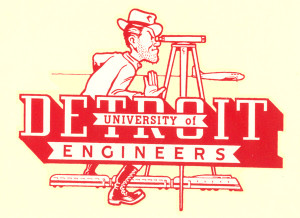 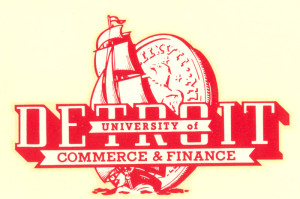 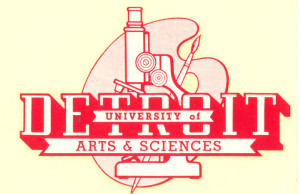 Our Auer hours to retirement… February 2016 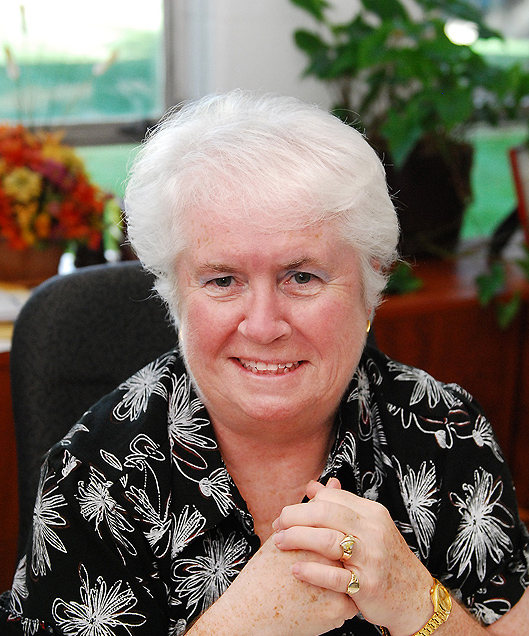 By the end of today, the University of Detroit Mercy’s Dean of Libraries and Instructional Technology, Margaret Auer, after more than 54 years of service to the university (34 as Dean), will step down from her position to take a well deserved period of rest, relaxation and move to retirement. For one person to stay in one place for so long is probably a record that will be hard to top, I don’t think you will find anyone who has spent more personal time and effort to make the university library the best it can be.

Instead of listing of all the accomplishments and challenges that have taken place under her tenure, I sat with her to have an informal interview about some of her memories of the university.

I asked her the following questions (and for the record, her answers are more from my notes and memory of our conversation and not recorded. There was a lot more to her answers, but you get the gist of it):

1. If I told you when you started that you would be working here for the next 50 years, what would you say?

In one of my meetings with Fr. Stockhausen (UDM President 2004-2010) he asked me if I was going to be here for the next 50 years. I said “Do you know how old I would be? I don’t want to work that long.” I was a student here (Class of ’65) and had planned on going into teaching. I had no plans to be an administrator. I started work at the university in the Alumni office and later came to work in the library.

2.Did you ever consider applying somewhere else to work?

Maybe around the late 80′s I thought about it, but I had some family commitments. I was the primary caregiver for my parents and my sisters had their families to take care of. There were other libraries around here, but I couldn’t go out of state and why go somewhere else for new challenges when I could find them here.

3.Are there any regrets or something you wanted to do with the library but it never happened?

We spent months working with the architects to putting an addition to the library. It would have opened up new spaces and extended the half floors of 2M and 3M. It would have brought the library into the 21st century-but the budget and other issues prevented that plan from being put in place. It was also very frustrating to have all the different moves that various libraries had to go through, shifting collections, open a library, close a library, and merging libraries. With all the moves it was often difficult to get the new or merged libraries to realize its full potential in servicing the student.

4.What are you going to miss the most?

The people. I love the profession. I like to be able to mentor people, get them to broaden their perspectives. So many of the former librarians here have gone on to head large libraries. like Nancy was head of DPL (Detroit Public Library), Linda is Director at Saginaw Valley State University, Carol at Sterling Heights Public Library, and John at Oak Park Public Library. 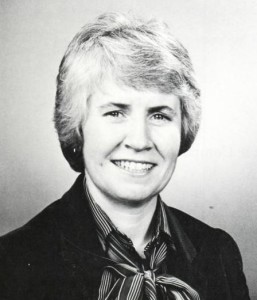 5.Do you have any words of wisdom for the next library dean?

My father told me when I first accepted this position “Uneasy is the head that wears the crown”. At first I never really understood what that meant, but I do now. If things go wrong, its your fault, if things go right, its because everybody else does their job. Its not personal, it comes with the territory of being in charge. I would also tell her: Enjoy what you do! Look forward to coming into work everyday-well maybe not all the time.

Thank you Margaret for EVERYTHING!. You have set some high standards for the next dean. Have fun in your retirement. 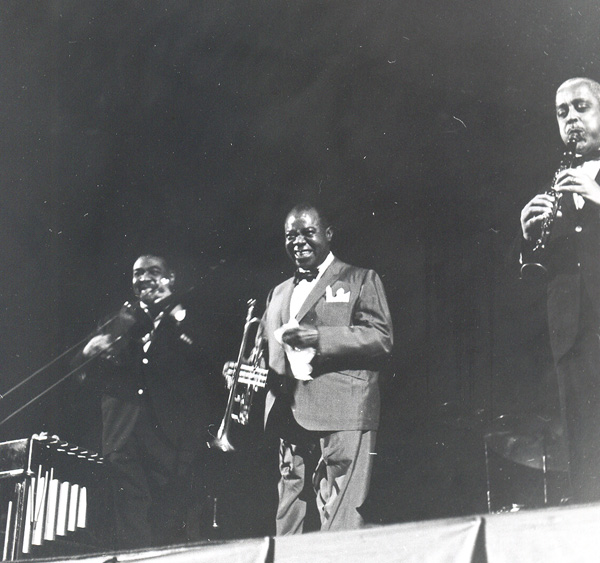 Louis Armstrong gave a performance as part of the University of Detroit’s Town and Gown Series. He was in town during the UD’s Mardi Gras weekend and help crown the King (Robert Plantz) and Queen (Carolyn J. Popp) of Mardi Gras at his concert. 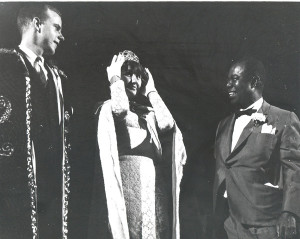 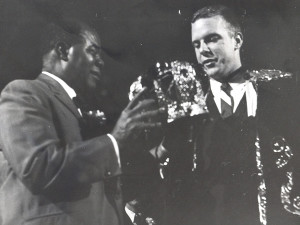 As part of the festivities during that weekend there was a street parade of costumed marchers down Livernois, a Mardi Gras Ball, and after Louis Armstrong’s concert and again after the basketball game, students could go to “Papa John’s” for some gambling action. 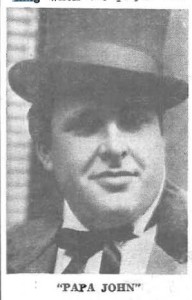 Where was Papa John’s?  It was upstairs in the student union. The casino had blackjack tables, over and under wheels, crap tables and roulette wheels. To play, each person was provided with a set amount of paper money which he or she will try to increase by betting on the various games. At the end of the evening when the player has won the required number of paper dollars for a chance on a prize, he could go to the “Double or Nothing” booth for a prize. The prizes could be Batman comic books (which now probably would be worth something!), a TV set, tickets to movies, dinner for two at Larco’s, electric carving knives, or six free Karate lessons.

There once was a Varsity Roller Rink! January 2016 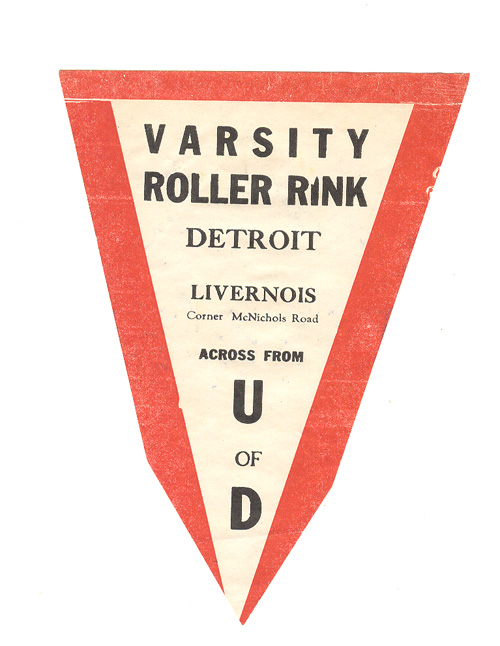 I’m used to seeing old UD Tower yearbooks turn up on ebay-but this little item is probably a lot rarer than anyone could imagine. This Varsity Roller Rink decal had with its posting a date 1941. If it did not have that date, I never would have been able to find out WHEN it was in business. I didn’t have a phone directory for that year (the library had 1938 then a big gap to 1953), so I browsed through the student newspaper, Varsity News, for the time period. I did find a couple of tiny little adds in a couple of issues for September 1940-but that was it.

It must not have been around for very long.

There were a few articles in the student newspaper about holding skating parties, but they were held at another place called Arena Gardens. 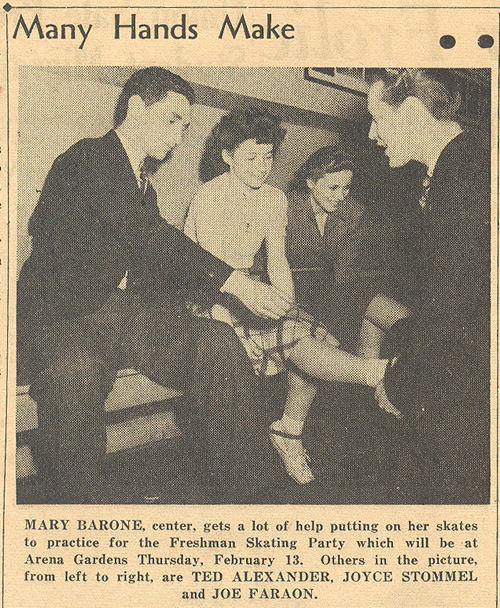 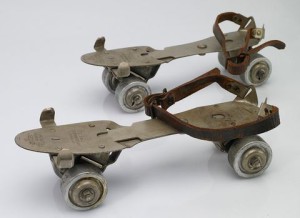