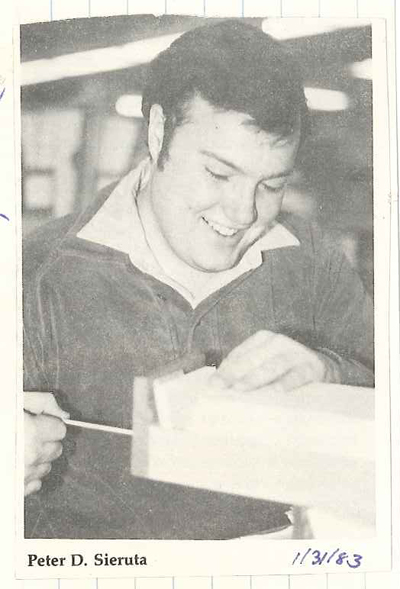 This is a personal tribute to a friend and former collegue, Peter D. Sieruta, who passed away recently as a result of injuries from a fall at his home. Peter and I started work about the same time at Mercy College of Detroit Library back in 1979.  He was the library technician that worked every department there was in the library. We had a lot in common: born in the same month (October), went to the same high school (Cody), although he graduated some five years later, and shared many of the same interest in books and movies.

Peter had a real passion for  books that far surpassed that of a normal person. Peter was a writer and a very talented one. He was most interested in young adult literature. He is the only person I knew who was as anxious to hear the nominees for the Newbery and Caldecott Medals as other people were for the Academy Awards. He had a collection of short stories in a book, Heartbeats, published by HarperCollins, and was a freelance writer for Horn Book Magazine. At the time of his death he was collaborating with Elizabeth Bird and Jules Danielson for a book, Wild Things!: Untold Stories Behind the Most Beloved Children’s Books and Their Creators which is scheduled to be published by Candlewick next year. His knowledge about young adult literature was amazing as evidenced in his blog Collecting Children’s Books . I was one of his many followers who would read his blog and in fact his blog is probably one of the reasons I asked if I could have a blog to write about items in the library’s Archives and Special Collections.

Peter was a playwright as well. He had a couple of his plays produced on stage at the Attic Theatre in Detroit and BoarsHead Theater in Lansing.  He made trips to New York to see plays on Broadway and haunt the used bookstores looking for collectible children’s books. We once attended a play on the UD McNichols campus. I remember him saying, “Remember that we parked in the lot facing the (Tower) clock!” I then pointed out that the clock was on all four sides, he just laughed. I wish I could remember the name of the play, Peter would have remembered, his memory was incredible.

When Mercy College had to layoff a number of employees in the late 1980′s, Peter was the one on the library staff that was let go. He was able to find a position with the library technical services at Wayne State University and had managed to survive their latest staff reduction. Maybe in a much larger library system, his passing would get little notice; but in the literary world of young adult literature, and in my own personal world, a very special person is gone. I would usually remember his birthday about a week late, but not this time. Happy Birthday Peter!