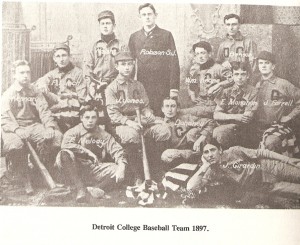 The first team to officially represent the college was in baseball in 1895. Detroit won the first game against the Polish Seminarians of Orchard Lake on May 23, 1895. Browsing through a series of articles “The Story of the University” in the Varsity News 1927-1928, some of the early games were played against the High School. Back in those days the Detroit College and the High School were under the same institutional umbrella.The games were not always played under ideal circumstances. One report in the Detroit College Diary noted “in a game with Mt. Clemens the field was “like a lake. No boats allowed-so the game was short.” (from The University of Detroit 1877-1977: A Centennial History) College baseball was not without its own controversy as in this report in the Varsity News, May 23, 1928, for the 1902 season: 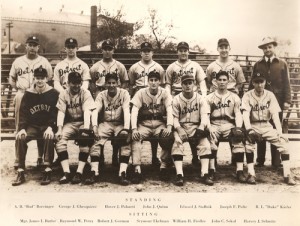 Even though the lack of manpower and resources prevented a varsity football schedule during World War II, they were still able to hold baseball games. Perhaps as a sign of the times the Varsity News, May 10, 1944 reported on a game with the Military Police. The game was won by the Military Police 2 to 1, but it was called at the end of 4 1/2 innings because of rain.

Through the years the baseball program produced a few players that went on to play in the major leagues. Dave Debusschere played both basketball and baseball at the university. He was one of the few players who also played both basketball (Detroit Pistons and New York Knicks) and baseball (Chicago White Sox) professionally. Bob Miller played for the University of Detroit for two years and pitched in the 1950 World Series for the Philadelphia Phillies. After ten years in the major leagues, he returned to the university as coach of the Titan team from 1965-2000. 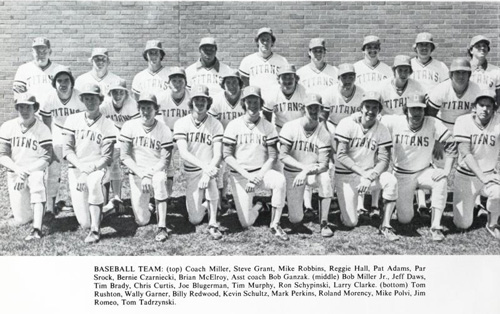