As the city of Detroit votes for its next Mayor, the University of Detroit Mercy is no stranger to having former students get elected into the position.The University of Detroit Law School produced three students who eventually succeeded in their run for the office.  Don’t know what the odds could be, but it would be three mayoral administrations in a row; Miriani, 1957-1962, Cavanagh, 1962-1970, and Gribbs, 1970-1974.

Louis C. Miriani graduated from University of Detroit Law School in 1922. I can’t find a class picture of him because the university did not have a yearbook until 1923, and they did not have a class picture of graduating students that I can find in the Varsity News for 1922. Miriani initially came into the mayor’s office upon the death of Mayor Albert Cobo in 1957, but did win the position on his own in the city election that same year. 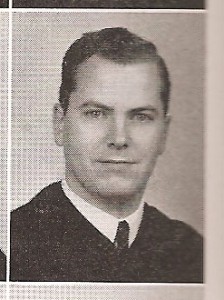 Miriani tried for another term as mayor, but was defeated by Jerome P. Cavanagh. Cavanagh had two degrees from the University of Detroit, Bachelor of Philosophy from the College of Arts and Sciences in 1950 and a law degree from the Law School in 1954. It was a pretty close race, according to the Varsity News, with the Varsity News being the only city newspaper to predict that Cavanagh would win the election. He was very popular in his first year as mayor, and easily won re-election in 1965. His second term did not go as well when the city had to call in the National Guard to quell a riot which started when the police raided a blind pig in 1967. He decided not to run for re-election in 1969.

Roman S. Gribbs won election for mayor in 1970. He also had two degrees from the University of Detroit, Bachelor of Science in Economics and Business from the College of Commerce and Finance in 1952 and a law degree from the Law School in 1954 (the same class year as Cavanagh!). As a student, Gribbs was very active in the university: president of the Student Council, member of the Governor (G. Mennen) William’s Michigan Youth Commission, vice-president of Alpha Sigma Nu and a member of  Blue Key, a national honor society. He declined to seek re-election in 1973 and as of this year,2013, was the last white person to hold the office of Mayor in the City of Detroit. 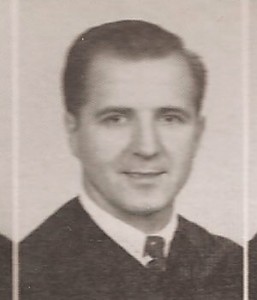 This year, as another race for mayor take place, there is another UDMercy alumni in the running, Benny Napoleon. Napoleon graduated from Mercy College of Detroit (which consolidated with the University of Detroit) with an Associate of Arts and a Bachelor of Arts in 1982. (Don’t know how that works out, but it was possible to get those two degrees at the same time at Mercy College.) I was a librarian at Mercy College and remember seeing Benny come in to use the library quite often. He always seemed to have a smile on his face whenever I saw him. I do not have a vote in this election, so all I can do is wish him well in whatever the future holds for him.