It was not an announcement UD president the Very Rev, Laurence V. Britt wanted to make: The University of Detroit has dropped Varsity football. His statement in part reads: “After careful appraisal of its most recently completed football season and detailed review of the program over the past ten years, the President and Trustees of the University of Detroit have now been compelled to make the decision to discontinue the university’s program of intercollegiate football. Despite concerted efforts to make the football program self-supporting, it has continued to be a deficit-operation. this year’s deficit will be well in excess of $65,000.00.”

It probably should not have come as too much of a surprise given the statistics such as falling game attendance (average 11,000 in a stadium that holds 20,000) and a losing record (in past three years a compiled record of 6 wins, 21 lost and one tie), in addition to the financial losses. The university had not made money on football since 1951 when UD played Notre Dame at Tiger (then Briggs) Stadium.

The president waited until after Thanksgiving to make the announcement. As might be expected, there were some very unhappy students. 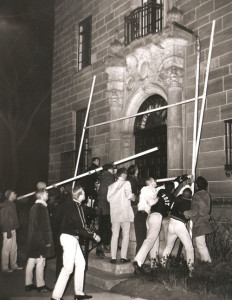 In spite of the inclement weather some 800 students staged a massive protest against the decision to drop the football program. They tore down the now useless goal posts and marched over to Lansing-Reilly Hall where the priests lived. When their chants of “We want football” went unheeded, they turned to the intersection of McNichols and Livernois blocking traffic. The police did their best to quell the demonstration and had a couple of police cars damaged in the process. At one point the Detroit Fire Department arrived to supplement the 32 police cars on hand to see if prospects of a cold shower in 16 degree weather would  disperse the students back home. 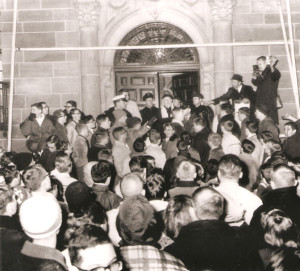 That was the first day reaction to the announcement. The students were not finished demonstrating just yet. The next day the protest took to the Lodge Expressway. There were rumors that during the half-time basketball game between UD and Purdue, there would be some kind of demonstration, but fear of forfeiting the game kept the protest to a vocal outcry. After the game, however, the crowd eventually grew and the cry of “To the Expressway” could be heard.  When the crowd reached the Livernois overpass, students leaped over the chain-link fence and swarmed over both lanes of the highway. Only about 200 students actually stood on the expressway, but it was enough to block traffic for a half-mile in either direction. After about twenty minutes, the police arrived and moved the students off the expressway. Some of the crowd then made a move towards Marygrove College. Continued police presence finally moved the students back to their residence halls and parked cars. After two nights, the student demonstrations finally came to an end and fittingly, a student bugler played “Taps” at the Fisher Fountain.