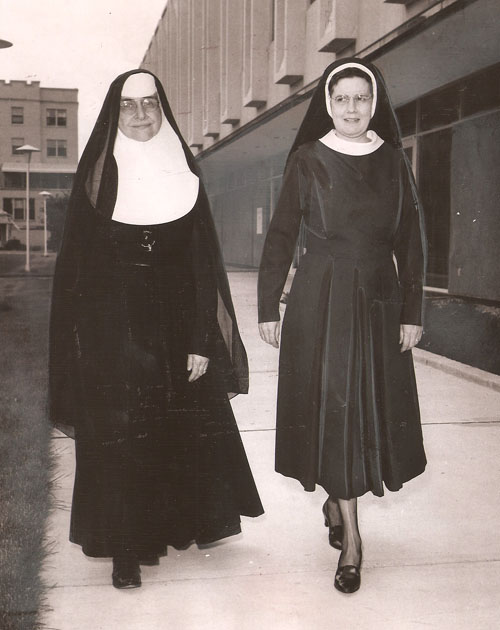 Over the past few weeks, as part of a grant, I have been sitting in on interviews with some of the Sisters of Mercy who were connected in some way with Mercy College of Detroit. In the early days, Mercy College of Detroit was not only a school for all young women to receive a liberal arts education for nursing or education, it was also a place where women would begin their education to enter the order of the Sisters of Mercy. The stories have been inspiring, touching, humorous, and for me a realization of just how unselfish and service oriented the Sisters of Mercy are to helping the poor, sick, and those in need of a good education. After the interviewing sessions have been completed, the stories will be posted (video/audio and/or text) for anyone to see on the library page.

One of the things that gets mentioned a lot by the sisters is how they felt about the change from the traditional habit to the modified habit (which the sisters used for only a short time) to the secular fashion that is worn today. So far its been pretty unanimous that they were glad to see the old habit go away. The changes started in the mid 1960′s, not long after Vatican II. Those habits were made from black serge material (about 9 yards worth!) and it gets very hot to wear during Michigan summers which can get pretty brutal, especially at a time when not a lot of buildings had air conditioning. You have to admire those nuns wearing those heavy black habits; they would just hitch them up and get right down on the ground with the kids and play marbles or whatever activity they participated in where all that extra material would be a problem. 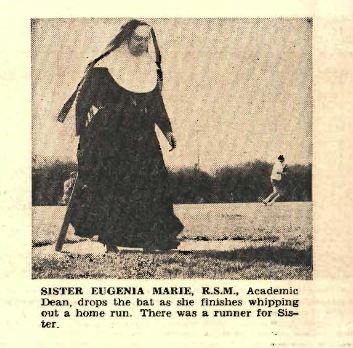 All the sisters were asked: “Why chose to join the Sisters of Mercy over another order?” The common response, aside from having them as teachers in grade school; they saw a lot of joy and humor in the group. As one who has not had a lot of contact with religious communities, I had a very stereotypical view of nuns and any form of the term “fun” is not something I would have associated with the Catholic church. After listening to the stories from the sisters, if I were trying to decide which order to join, I would have gone for the Sisters of Mercy too.

I am looking forward to sharing the many stories we have recorded so the public will get to know these amazing Sisters of Mercy. Their commitment to the mission started by Catherine McAuley is something that I think gets overlooked and needs to be recognized. Our project to archive and preserve these memories will make sure that the Sisters of Mercy associated with Mercy College of Detroit will never be forgotten.